To commemorate the centenary anniversary of women students being formally admitted to Oxford, the University hosted a public panel-event featuring inspirational women alumnae in conversation at the iconic Sheldonian Theatre on Wednesday 19th May 2021. 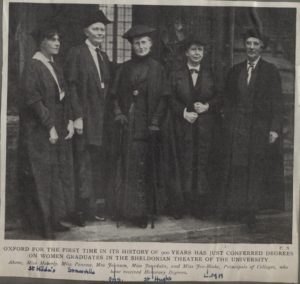 Since October 2020, the University of Oxford’s Women Making History campaign has celebrated the contributions of women to scholarship and university life and reflected on the journey towards gender equality at Oxford.

OUEV were delighted to host this special event featuring an influential panel of speakers whose expertise spanned the sciences and media and public policy, particularly as the Sheldonian Theatre is the ceremonial home of graduations in Oxford.

Women were first granted full membership to the University on 7 October 1920 and one week later, were given the right to be awarded degrees. Women students who had ‘informally’ studied at women’s only colleges, such as Lady Margaret Hall, since the late 1870s, but had been denied a degree, began to return to the University to claim them at the historic building.

The event included an intimate, socially distanced audience and live-stream via Facebook and YouTube allowing a complete audience and panel interaction with a question and answer session too. We love how we can blend the modern world of social media and instantaneous live-streamed events with the steadfast historical elegance of this special venue. Joanne Fisher, Events Manager, said,

“As always, the staff were really great to work with and so helpful.  I couldn’t have asked for more.”

Catch up on the full event below: